Past Events from the Amherst Historical Society

Highlights: Past events from the Amherst Historical Society

In recent years we have been proud to host a wide variety of events–both traditional and diverse.
We look forward to presenting more events for the public starting in August when the Museum reopens!

Cleopatra: A Portrait in Music

Sept. 27, 2019
Since the opening performance of Giulio Cesare in 1724, it has remained one of the most celebrated of George Frideric Handel’s works, and one of the most widely-performed operas of the Baroque period. A story of betrayal, political intrigue, and love conquering evil, the opera imagines the story of Cleopatra dethroning her tyrannical brother through charming and winning the famed Julius Cesar to her cause.

Cleopatra: A Portrait in Music will feature a selection of Cleopatra’s arias from Giulio Cesare, showcasing the multi-layered queen in her moments of political cunning, heart-wrenching sorrow, and all-encompassing love. This Songs and Serenades event will star Libby Maxey, soprano and Graham Christian, piano with special guest Katherine Blaisdell.

July 20, 2019
What would Emily Dickinson think of our world now? In a time-traveling twist, a young girl gets too curious about Emily’s famous white dress and accidentally unleashes powerful magic that brings the poet to the present day. Together, the two must find a way to get Emily back to her own time, and along the way they discover what it means to be an artistic woman across history.

This original play presented is presented by the Multi-Arts Center and written by Maia Kinney-Petrucha. The product of collaborative research, this production focuses on the triumphs that come from having a community who cares.

July 20, 2019
This year we are celebrating the Heart and Soul of the garden. We have six (never on the tour before) experiences for you along with the Strong House 18th century garden and new beds of medicinal herbs. You will visit professional and personal, Japanese and permaculture, suburban and urban landscapes while learning what makes these gardens reach your heart and soul.

June 1, 2019
Experience Mabel Loomis Todd’s Amherst–from her earliest residence at the Amherst House hotel to her final resting place in Wildwood Cemetery. This extended tour given from Mrs. Todd’s perspective was narrated by Dr. Julie Dobrow as we travelled in motorbus comfort with stops at the Homestead and Evergreens, the Observatory, and Wildwood Cemetery. Be prepared to learn about the artistic and literary achievements that made Mabel extraordinary in her own time, and a fascinating person to study today.

2018 Amherst House Tour “Come Over to My House”

November 10, 2018
In the words of Doctor Seuss: “There are all kinds of houses around to be found!” Inspired by his joyous portrayal of home, Come Over to My House is the theme of the 2018 Amherst Historical Society’s annual house tour. This year’s tour, on Saturday, November 10, 2018, from 10 a.m. to 4 p.m., features seven Amherst area properties designed in a multitude of styles and built with varied materials.

The self-guided, go at your own pace tour features seven properties, including five private homes, open just for this day, the Historical Society’s c. 1760 Simeon Strong house, and the former chapel at the University of Massachusetts, most of which have both been through significant changes, renovations, and uses during their history.

September 30, 2018
Come see the latest installment of Time Travelling Stories at the Amherst History Museum! Meet Angeline Palmer, a brave African-American girl who was saved from slavery with the help of residents of Amherst. Discover the roots of what makes Amherst such a unique place: our avant-garde spirit, celebration of differences, and ability to come together as a community to stand up for human rights.

This original play presented is presented by the Multi-Arts Center and written by Maia Kinney-Petrucha. The product of collaborative research, this production focuses on the triumphs that come from having a community who cares.

October 4, 2018
“Fire!” It is a cry that sends adrenaline pumping through our bodies. On Thursday, October 4, 2018, join us and explore the exhibit Historic Fires of Amherst to learn how fire reshaped Amherst between 1830 and 1930.   We have continued to add items to the exhibit which features enlarged before and after photos from the Jones Library Special Collections of buildings that were destroyed by fire – and what was built in the aftermath. 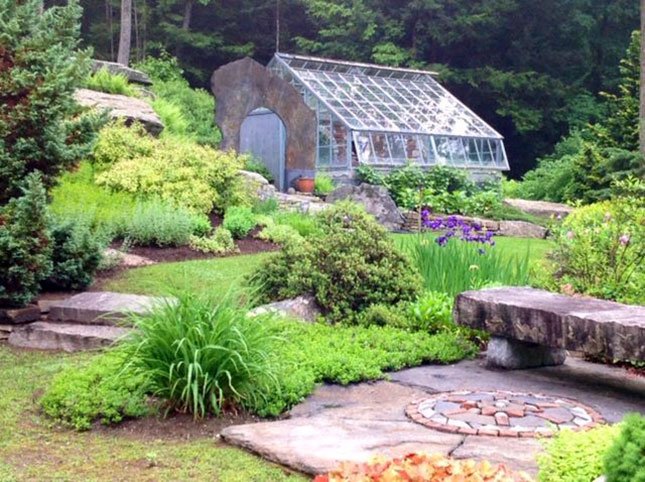 THE MAZUR GARDEN, FEATURED IN THE 2019 GARDEN TOUR 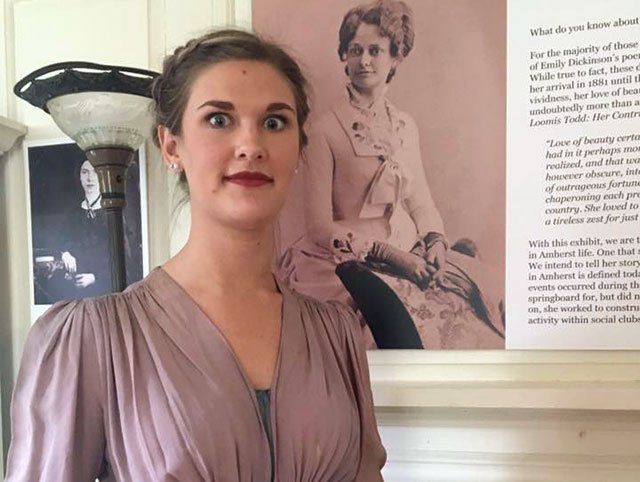 June 30, 2018
This year we are pleased to share six extraordinary private gardens new to the Garden Tour. Each of these gardens was created by the current owner—the oldest dates back 40 years and the most recent was begun in 2012. Flat lands and hills, woodlands and open spaces are all featured in this rich presentation of what is possible in a garden plot with vision—and hard work!

Along with the 18th century garden maintained by the Garden Club of Amherst, the Simeon Strong House will feature the work of Ecological designers Andrew Kilduff and Tim Tensen from TK Design Lab. They will show how their work aligns with garden design and provide a short presentation and display offering tour-goers an opportunity to explore ideas about home gardens as unique plant communities emphasizing how these communities will change as homeowners and designers respond to the effects of climate change.

June 7th, 2018
Come celebrate the Amherst Arts Night Plus at the Amherst History Museum, and take a walk through Amherst, circa 1839!

As the old adage goes, a picture tells a thousand words.  Historical images have even more secrets to tell. This event will feature a look into life in Amherst in the year 1839 through analysis of the print ‘Valleys of Erosion”  by artist Henry J. Van Lannep.  This historical illustration, which gives view of Amherst circa 1839 from Mt. Pleasant to the Holeyoke Range, contains a wealth of details and glimpses into the past to unpack.  Come and explore!

Grand Concert! An Evening of the Music of Jenny Lind

May 4th, 2018
One of the most remarkable careers in music was that of Swedish-born Jenny Lind (1820-1887). She was renowned for her voice in the mid-19th century, and toured the United States (including Northampton) between 1850 and 1852 under the auspices of no less than America’s great huckster and showman, P. T. Barnum. Songs and Serenades’ third appearance at the Strong House pays tribute to this remarkable woman and her work with a concert drawn from her repertoire, as well as piano works by her friends and contemporaries, including Rossini, Bellini, Meyerbeer, and others.

May 3, 2018
During Amherst Arts Night Plus, follow the path of luminaries to the Amherst Historical Society for an exclusive exhibit of art inspired by Jenny Lind, the Swedish Nightingale, musical sensation of the 1850s!

Jenny Lind spent the early months of 1852 honeymooning with her husband Otto Goldschmidt in Northampton and ended their time in town with a farewell concert in May.  In 2014, artist Elizabeth Stone created two pieces inspired by Jenny Lind’s sojourn in Northampton. Jenny’s Dress, reproduces a dress worn by Lind; made of paper, thread, tape, cord, plastic and paint, the dress measures 53? in height by 42? in width. Portrait of Jenny Lind is a life size watercolor and ink on mylar. With these two pieces, the artist is helping us illustrate our May 4 program, Grand Concert! The Music of Jenny Lind. Come visit the museum during Amherst Arts Night Plus to get a sneak peak at these beautiful pieces, meet artist, and learn more about the Swedish Nightingale!  Refreshments provided.

Join us Sunday, February 11 for our Founder’s Day celebration at 2:00 p.m. at the Jones Library Woodbury Room as we commemorate the February 13, 1759 founding of Amherst. We will begin with the brief Amherst Historical Society Annual Meeting, introduce you to this year’s Conch Shell Award winner and President’s Award winner, and invite you to stay for the Mabel Loomis Todd lecture given this year by Lynne Zacek Bassett on “Reigning Fashion: Victoria and the Queen, 1837 – 1901.” A reception at the Strong House will follow the presentations.

Annual Meeting
The Annual Meeting of the Amherst Historical Society includes a report on our programs, financial status and the election of trustees. Members vote on the trustee slate that includes President George Naughton, Vice-President David Dunn, Treasurer Rebecca Fricke and Clerk Bonnie Isman. We will welcome new trustees and voice support for those continuing to serve.

Recently retired, Jonathan Tucker served as Planning Director for the Town for ten years from 2007 to 2017. In that role, he supported several town boards, including the Amherst Historical Commission. Hired by the Town as a city planner in 1985, he guided the 2005 Preservation Plan from start to finish working closely with the consultants. This document has serves as the plan for historic preservation and as the preservation component of the comprehensive plan for the Amherst. Mr. Tucker also served as a board member and treasurer of the Historical Society. Raised and educated in Amherst and at the University of Massachusetts, he was described at the time of his retirement as having a “deep knowledge of Amherst history.” The Historical Society celebrates his integration of his love of local history with his professional career.

President’s Award
Gigi Barnhill is delighted to present the President’s Award to Jackie Tuthill, who has been an active member for more than twenty years. In that time, she has contributed her many talents to our efforts serving as a board member and clerk, and as a docent and photographer of activities. She continues to volunteer for our House and Garden Tours. In 2014, she conducted extensive research on the relocation of houses from the Quabbin Reservoir for a Five College Learning in Retirement course. She spoke on this subject in the Society’s History Bite Series and has continued to pursue this research into the region’s architectural history. Amherst has been home to Jackie and her family since 1970.

Mabel Loomis Todd Lecture
The award presentation will be followed by the Mabel Loomis Todd Lecture “Reigning Fashion: Victoria and the Queen, 1837 – 1901” given this year by Lynne Zacek Bassett. Ms. Bassett is an independent scholar specializing in historic costume and textiles who we are pleased to have as the consultant reviewing the Amherst Historical Society‘s textile collections. Her breadth of knowledge is unmatched in the region and we are grateful to have her address the cultural history of clothing in the Victorian era. What was the inspiration for women’s dress styles in the period? How was clothing made and who did the work?  What was Queen Victoria’s role as a fashion leader?

Kenneth Gloss, proprietor of the internationally known Brattle Book Shop in Boston, will give a free talk Thursday, April 20, at 6:00 p.m. in the Woodbury Room of the Jones Library, 43 Amity Street, Amherst, Massachusetts. The talk is cosponsored by the Friends of the Jones Library and the Amherst Historical Society and is open to the public. After the talk, as time permits, Mr. Gloss will do free verbal appraisals of books brought to the talk.

Ken will talk in about the history of his historic bookshop that was established in 1825. He will talk about and show some of his favorite finds and describe some of the joys of the “hunt,” as well as explain what makes a book go up in value. He has many fascinating anecdotes to share as well as guidelines for what to look for when starting a collection. He will be happy to take questions at the conclusion of his talk.