Included on this year’s agenda:

· This year the Amherst Historical Society has renamed our annual Conch Shell Award to honor our esteemed colleague Arthur Kinney, who instituted the award in 2007.

· In 2021, Civil War tablets inscribed with the names of the 300 Amherst residents who fought on behalf of the Union, including African-American residents who were members of the famed 54th Massachusetts Volunteer Regiment and 5th Cavalry, came back to public view for the first time since the 1990s.

The Amherst Historical Society recognizes the efforts of Dudley Bridges Sr., a World War II veteran who died in 2004, and who spent the last years of his life advocating and fundraising to find a prominent place to honor the handcrafted memorials donated to the town by the Grand Army of the Republic in 1893.

Accepting the award will be Mr Bridges’ daughter Debora Bridges and her daughter Anika Lopes, who saw the work to completion this year.

Our popular lunchtime series continues! All lectures start at noon; the February 25 lecture will take place over Zoom. More info and Zoom link

Regicide in the Family

Regicide in the Family

Phyllis Lehrer, who now writes 'The Lehrer Report', will tell her stories of working on the weekly Amherst Record newspaper from 1976 until the paper closed in 1984. 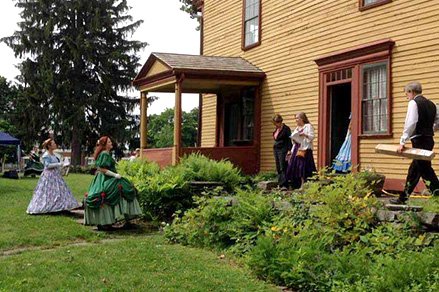 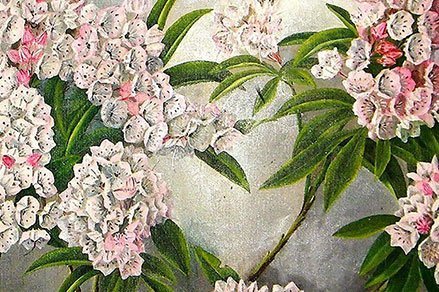 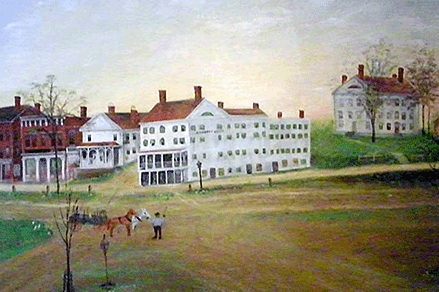 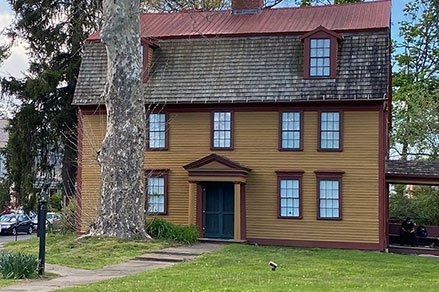 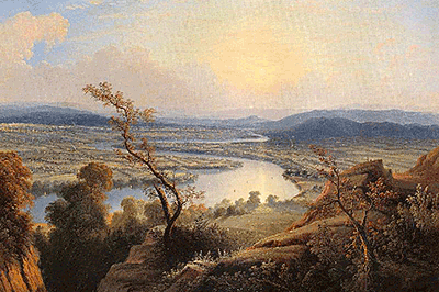 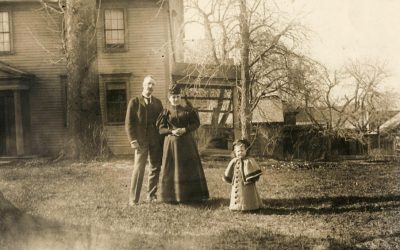 The magic of old photographs

Pictured above: Mr. & Mrs. Spencer Miller and Spencer Miller, Jr. 1895There is a charm in finding an old photograph; in seeing an image of a place you know, but taken when it was a hundred years...

END_OF_DOCUMENT_TOKEN_TO_BE_REPLACED Our September 23 History Bites presentation is now online. Lincoln Annibali, a student at Hofstra University, shared with us his enthusiasm for Henry Wilson. You may view the presentation here. ...

END_OF_DOCUMENT_TOKEN_TO_BE_REPLACED 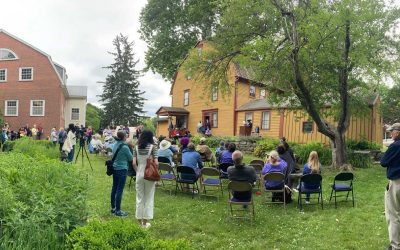 With the passing of the old year, we at the Amherst Historical Society can take a moment to review the events of the past twelve months...  We brought on Diana Lempel as a temporary curator, to work... 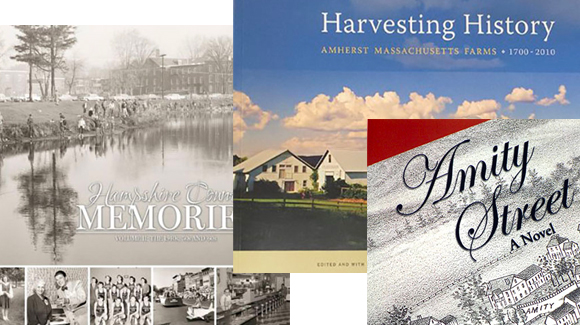 Help support the Amherst Historical Society! Shop our online store for books that highlight the history of Amherst. Titles include:

‘History Bites’–Highlights from past seasons

Jonathan Edwards and the Gospel of Love

From Arkham to Amherst

A glimpse into the Amherst History Museum’s permanent collection: 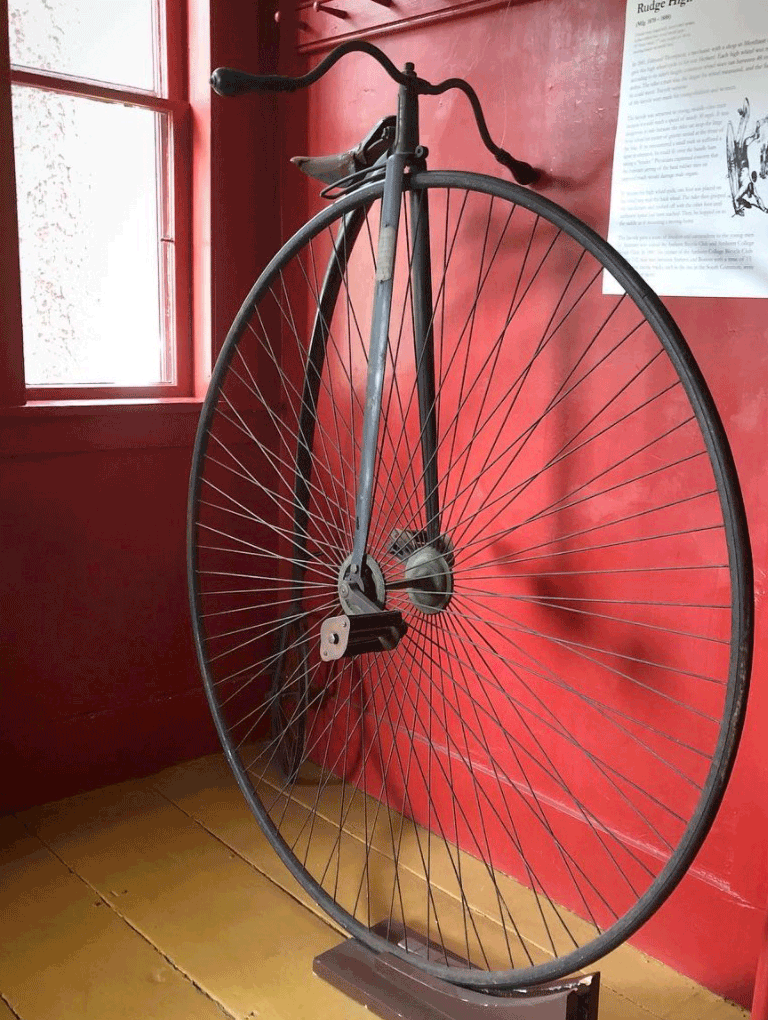 Rudge High Wheel Cycle (Manufactured 1870-1888). High wheel cycles were popular with young, middle-class men of the late 19th century for their speed- the bigger the wheel, the faster the cycle could go. A high wheel of this size could reach a speed of nearly 30 mph! This particular cycle was a gift from Amherst mechanic Edward Thompson to his son Herbert in 1881. High wheels were considered hazardous to the health of their riders- both because their instability (even a small rock or bump could cause the rider to fly over the handlebars and suffer a ‘header’) and physicians worry that the jarring of the hard rubber tires on unpaved roads would damage male organs. 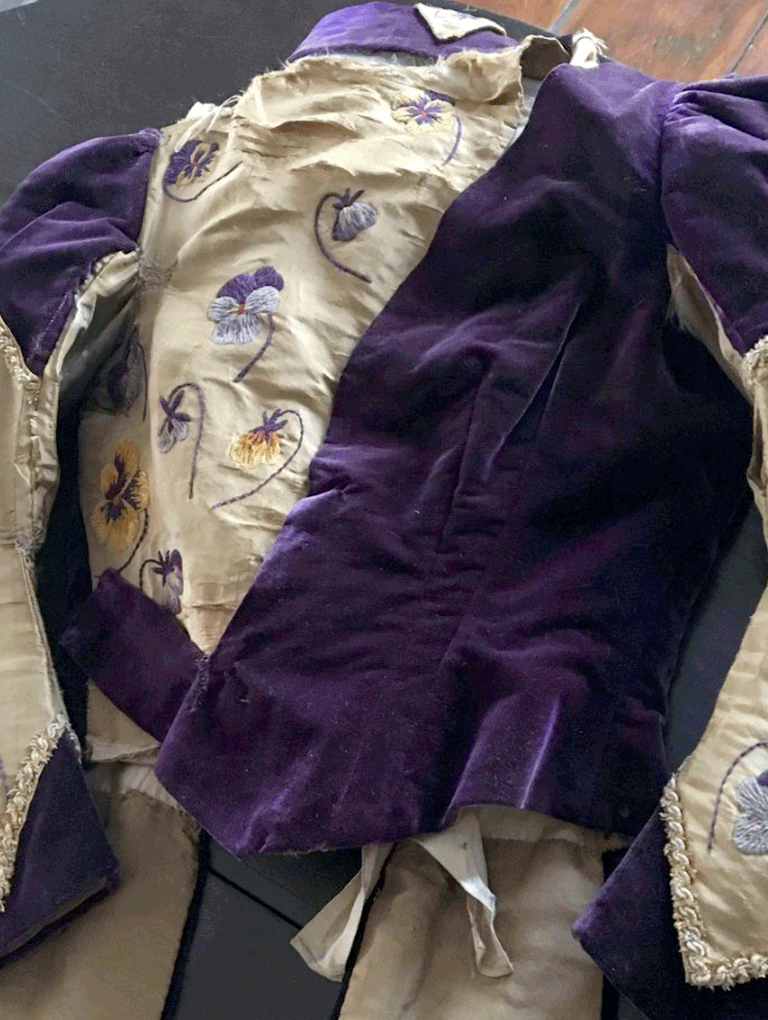 This unique late-19th century dress once belonged to Mabel Loomis Todd, and was donated to the Amherst Historical Society by her daughter. Purple velvet and old gold silk, with hand-embroidered pansies, created in 1890. Look at the detail on those flowers! Unfortunately, the dress is now too fragile to be displayed as it would have been worn. 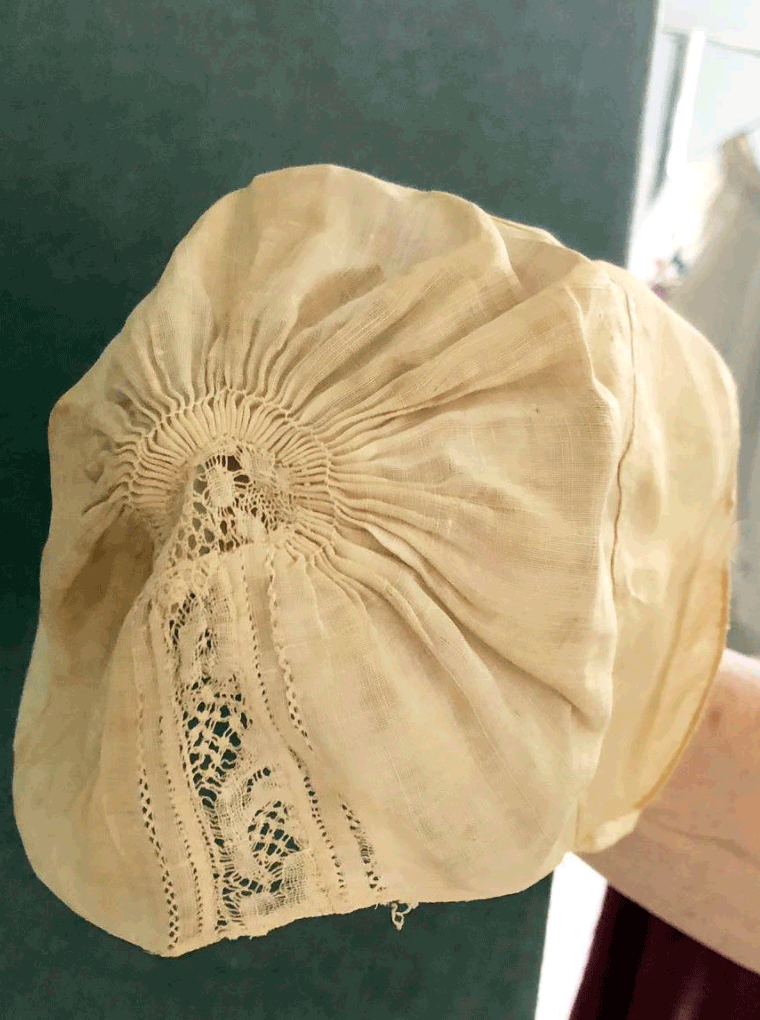 This fine linen infant cap is the oldest textile in our collection. The crown and side stripes are constructed of bobbin lace, a type of lace created by braiding and twisting thread held in place with pins set into a lace pillow. Take a look at the fine lacework- at the time, even the clothing of infants and small children often featured beautiful, delicate lacework. A piece of clothing like this would be passed down and reused over multiple generations of children. 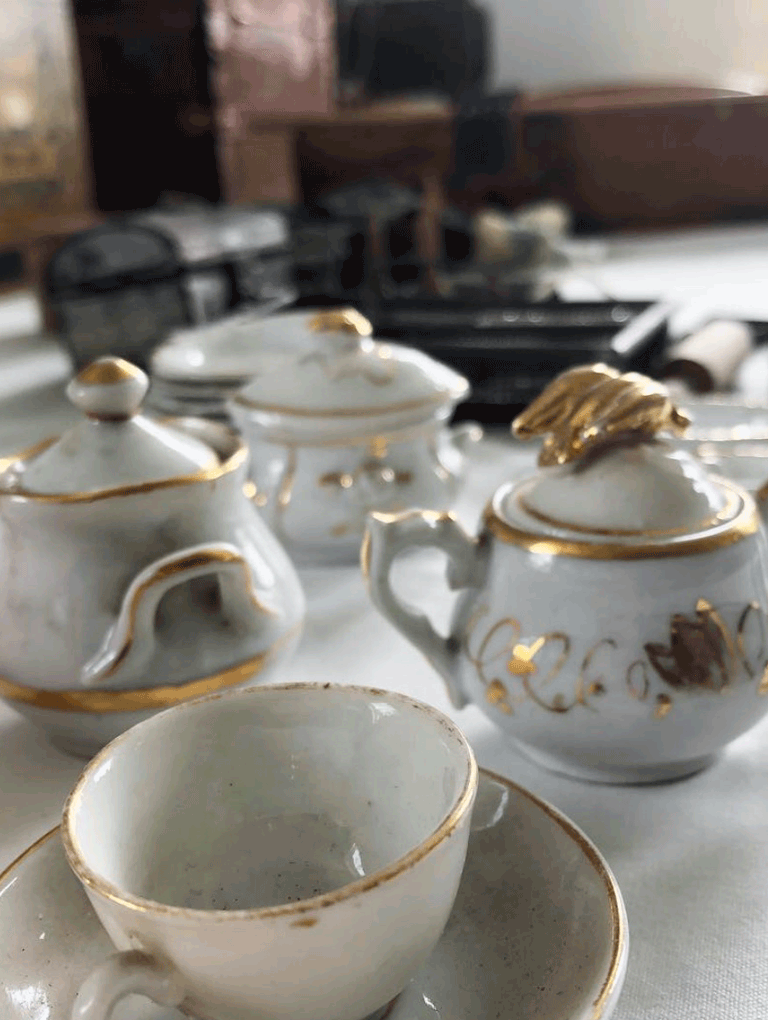 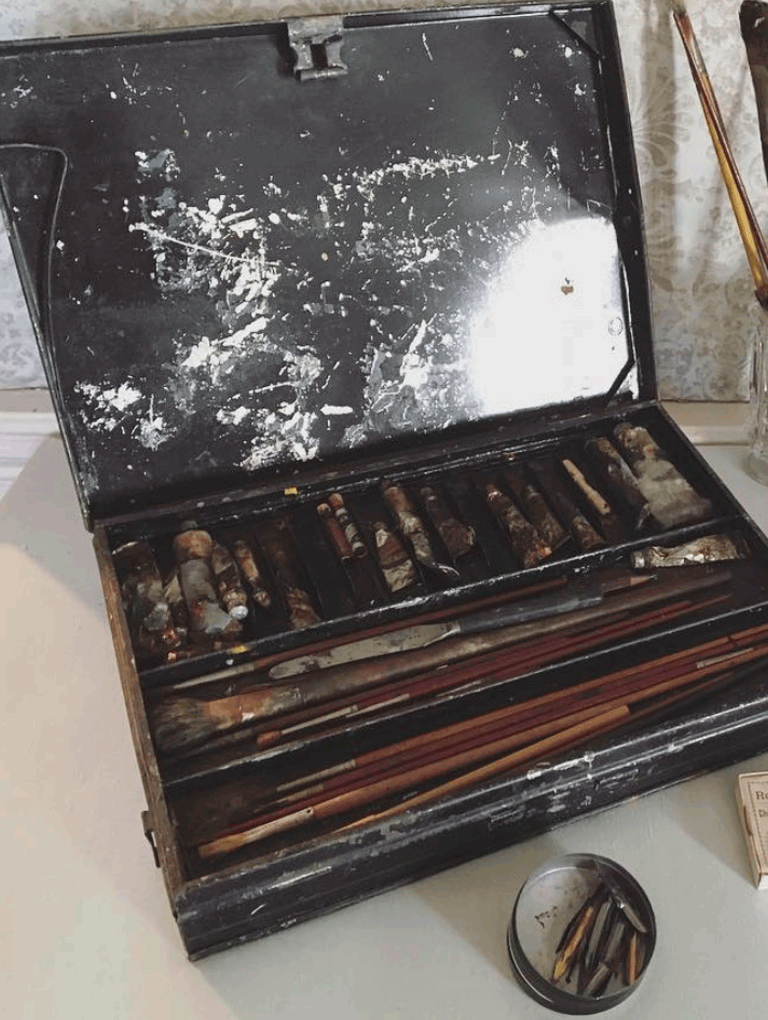 This 19th century paint set belonged to Mabel Loomis Todd, the woman responsible for editing and publishing the work of Emily Dickinson, as well as an artist and author in her own right. Todd authored books and articles, and travelled around the US on a professional lecture tour giving lectures on a wide range of topics, including Emily Dickinson, New England history, and astronomy. A prolific artist and writer, Todd continued creating and traveling until just shortly before her death. Mabel died in 1932 while camping in Maine.. 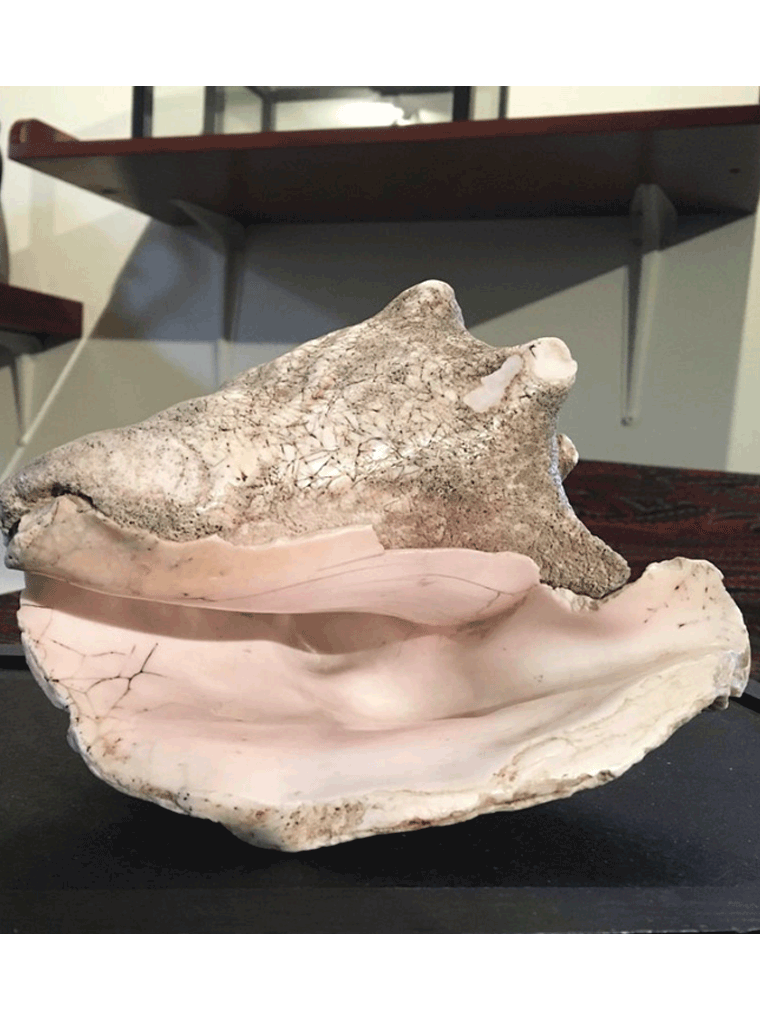 If you lived in what would become Amherst in the 18th century, this conch shell would have called you to the meetinghouse to worship. “Blowing the kunk,” as it was known, was an appointed job in the community, and the man responsible for blowing this kunk also swept out the meetinghouse and received for his troubles $3 a year. 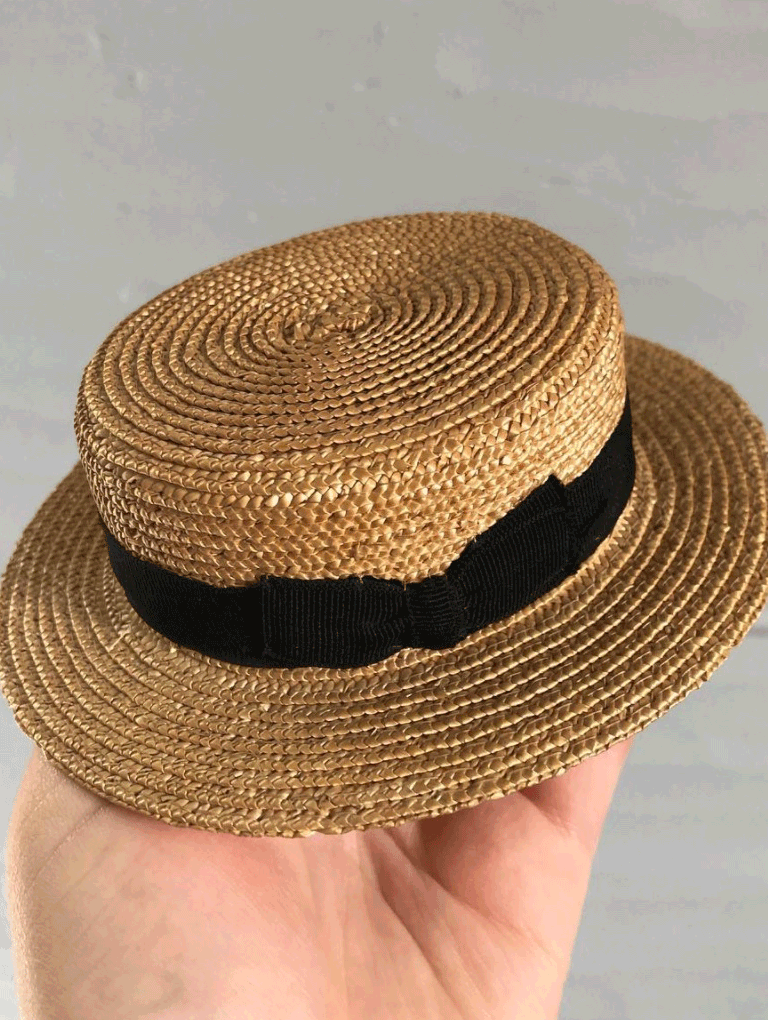 This miniature straw hat (c. December 17th, 1907) was created by the Hills Hat Factory in Amherst, MA, as a show piece for display to prospective customers. It is marked with the initials of Fannie Marilla (Davis) Pierce. 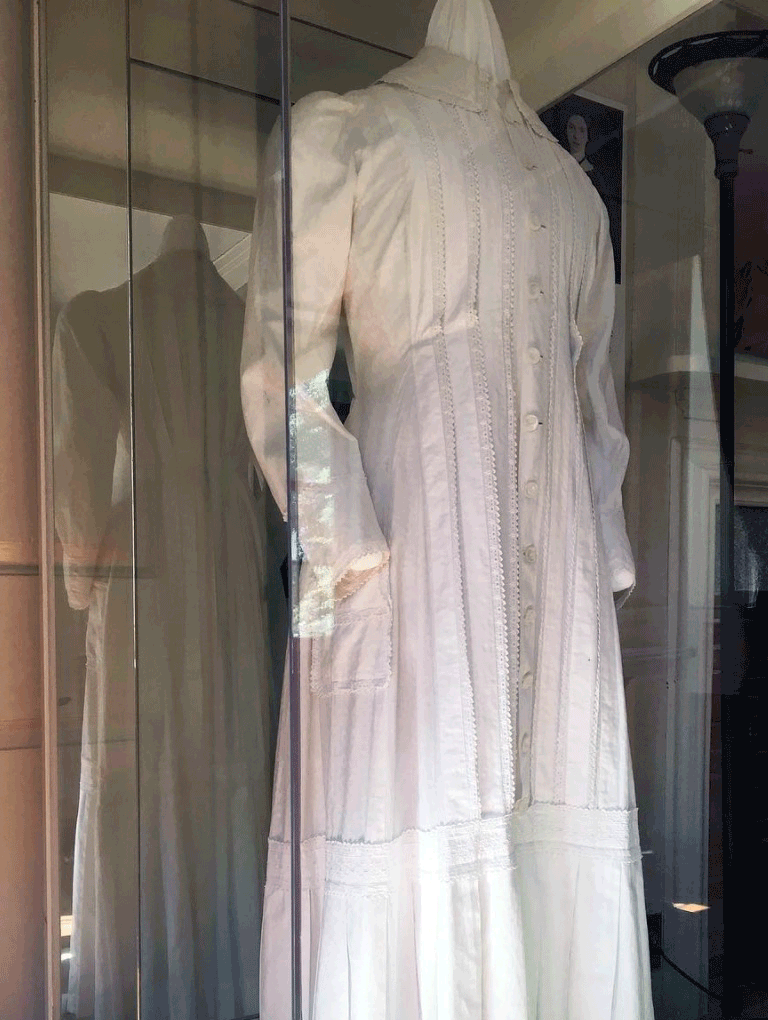 This 19th century wrapper is the only surviving dress known to have been worn by Emily Dickinson. After her death, it was passed on to a cousin and later came to the collection of the Amherst Historical Society. Its design is typical for a house dress of the 1870s-1880s; it is almost entirely machine sewn, and was made sturdy to weather frequent washings. 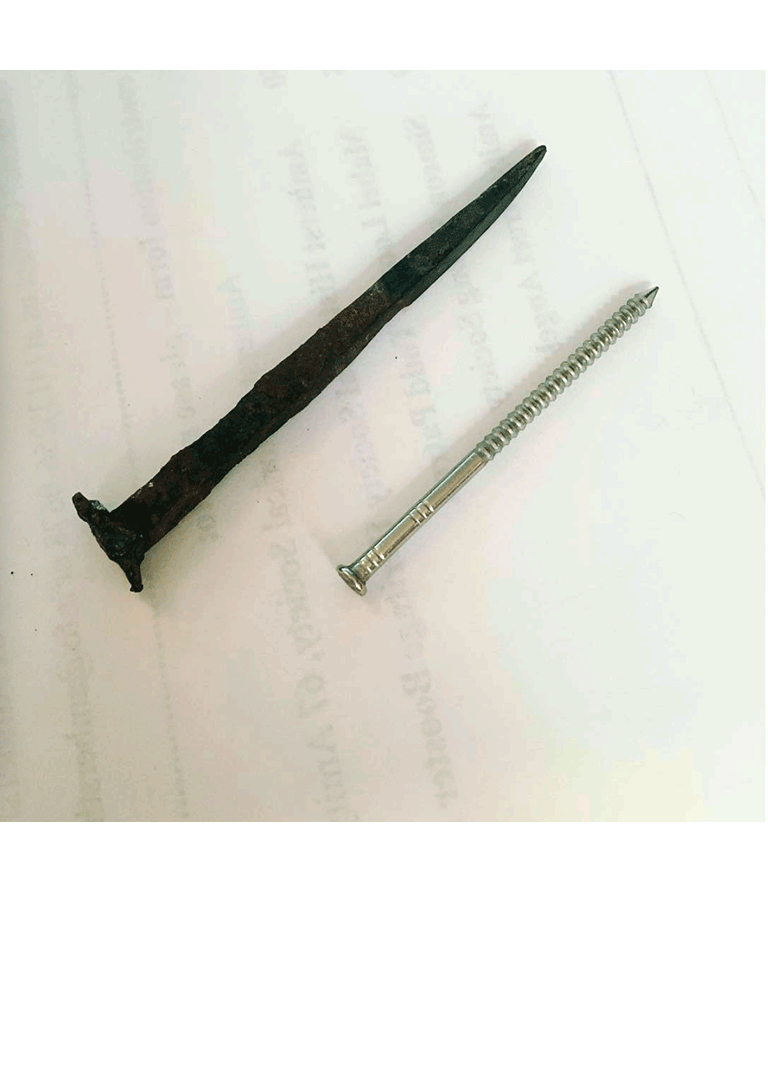 An 18th century rosehead nail from the Simeon Strong House, displayed next to its modern counterpart. As explained by Steve DeWolf, carpenter who specializes in repairing Pioneer Valley historic homes, this nail would have been forged by hand, the head created by striking the metal bar when it was hot. It was pulled from the side of the Strong House during restoration work. 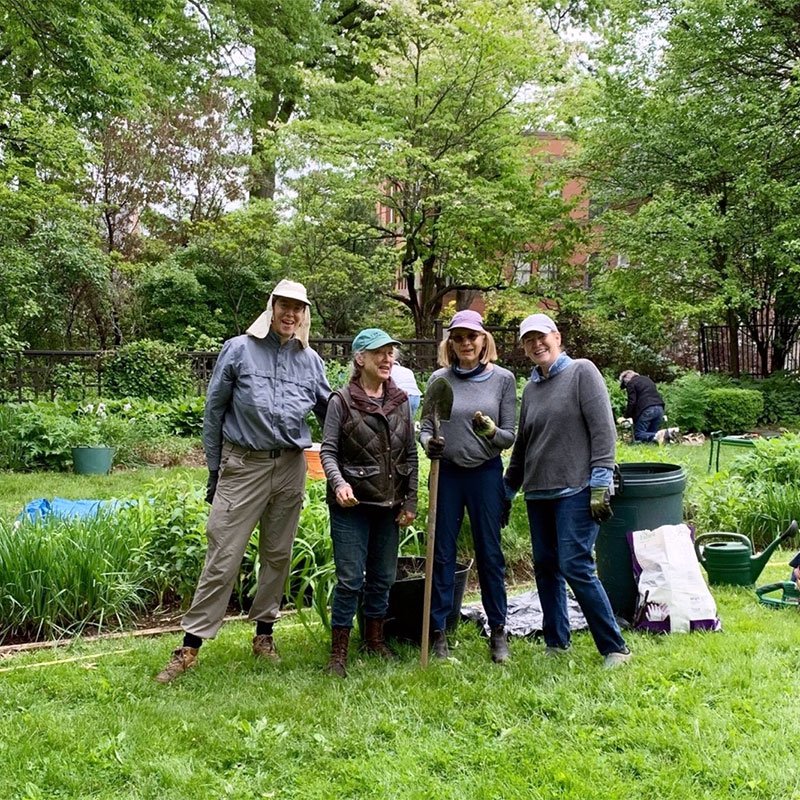 Find out how you can help. The Amherst Historical Society depends on the support of the community. We are currently looking for gardeners, educators, fundraisers, and more. Contact us for more information.